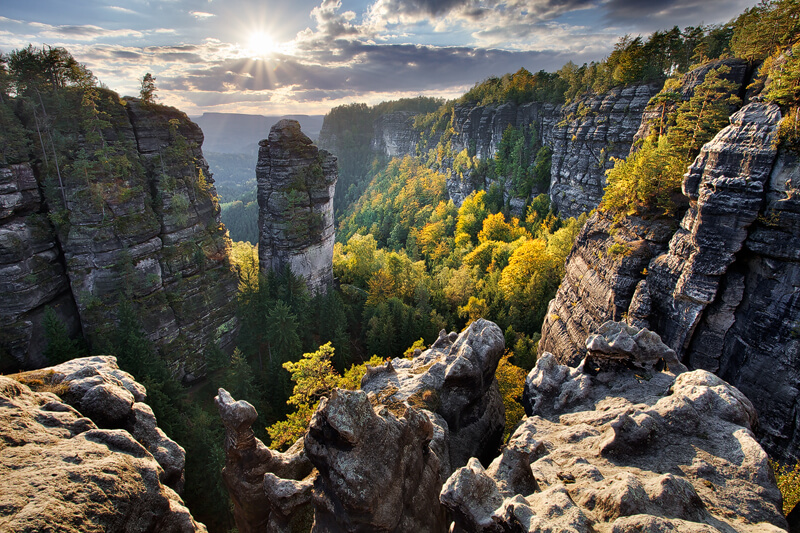 Prague maybe famous for its stunning, well-preserved historical sites that date back almost a thousand years. Yet, the northern Bohemia region’s history is dwarfs that of its capital by millions of years.

Bohemian-Saxon Switzerland located in the Elbe sandstone mountainsare a living, breathing ever-changing piece of earth. The landscape we see today developed millions of years ago at the bottom of a sea, are a consequence of water, wind and volcanic activity. A phenomenon that has given us the visually stunning scenery that we see today. Sandstone slabs that melt on top one another form deep canyons and stunning vistas that give northern Bohemia it’s iconic scenery.

It’s hard for us to say what we love most about the Czech national park.

Of all our landmarks, Tisa may be the least visited, but definitely not the least attractive. The Tisa Wall is a 90 million year-old sandstone plateau sitting on the west end of the protected region. The stones perched on the landscape create the backdrop for the quiet village. 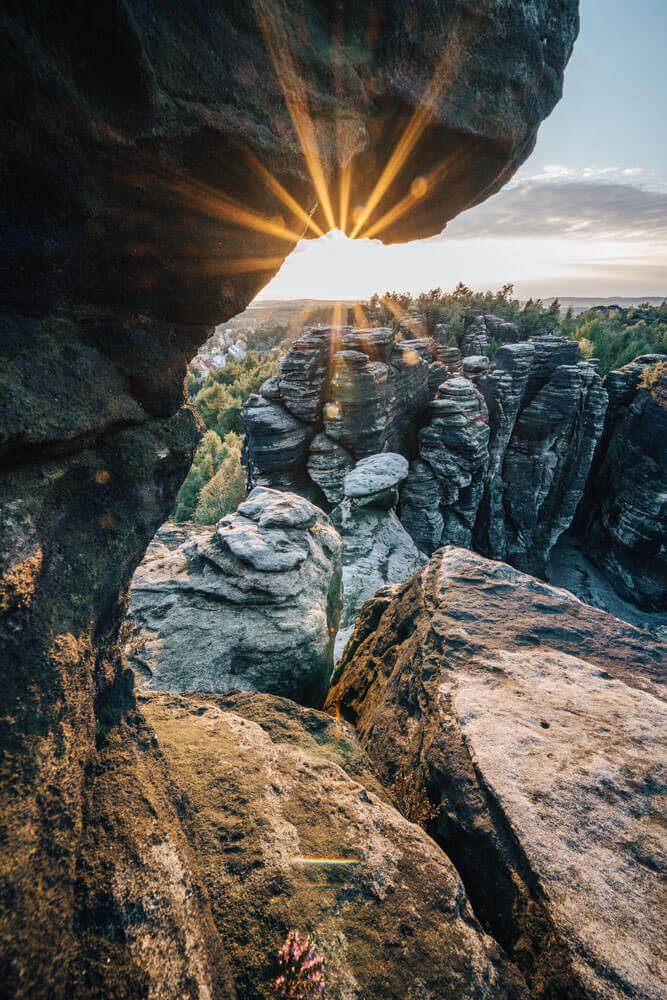 What makes a visit to this rock formation special is its lack of tourist traffic. This part of the park does lie in the protected Czech mountains, yet of the fellow hikers you will encounter will be local. While it is far from those other sites that make this park famous, yet holds fame of its own. This location was the site used in scenes from the Chronicles of Narnia. Visit Tisa in the winter, and you will see what we mean. 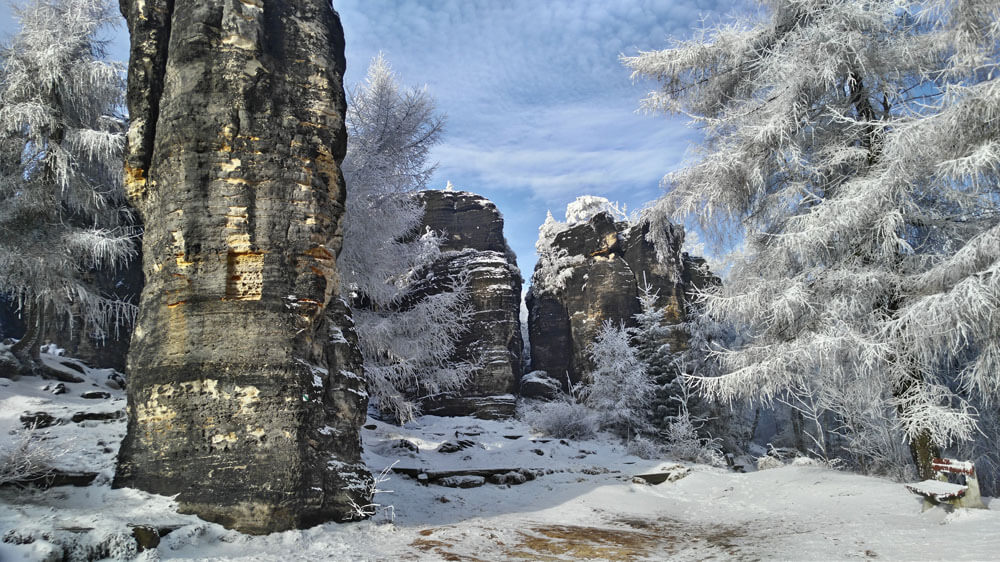 Aside from it’s fifteen minutes of fame, Tisa is one of our favorites. Hikers get the opportunity to get right up close by climbing over, under, through and around formations, while taking in the respective vantage points. Climbing to the top of them rewards visitors with a sweeping view of the village and valley below, along with experiencing the Bohemian nature like a local. 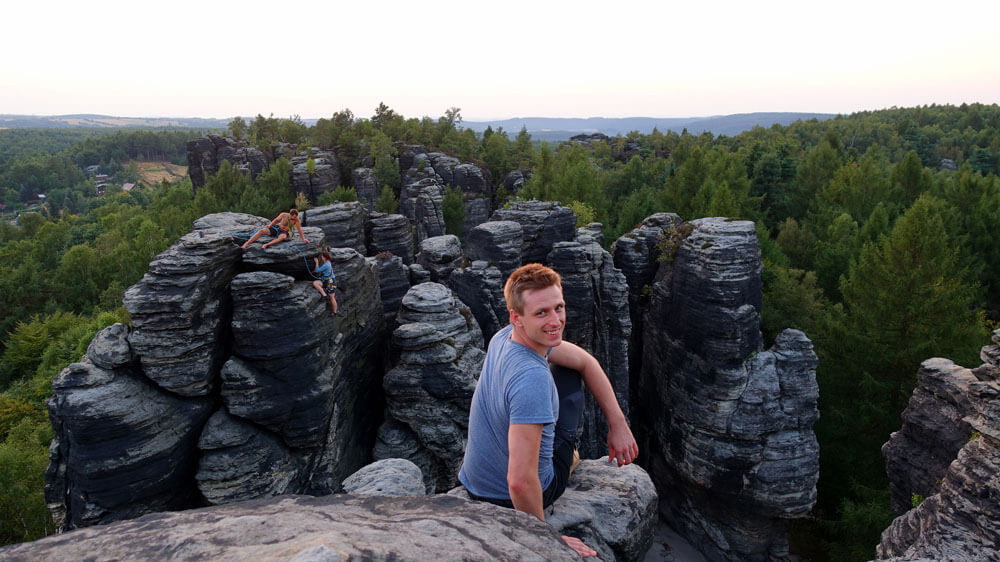 VISIT THE GORGES OF KAMENICE

Bohemian Switzerland national park is known for it’s epic sandstone formations, and for good reason. Yet, you could say this protected region holds a lot of secrets. Before the 19th century, this region was a mystery due to its remote location. When discovered, the wild gorge became an immediate destination for tourism. 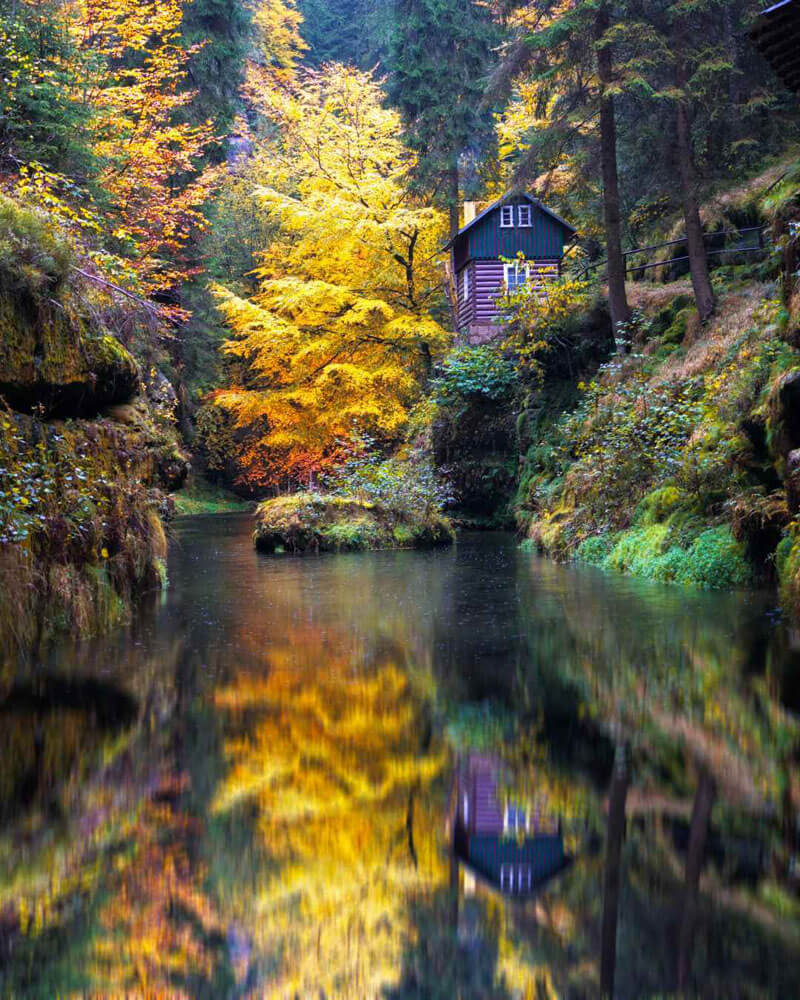 The Kamenice river which empties into the grand Elbe river has been carving these sandstone formations for centuries. The erosion has created deep canyons, known today as the gorges of Kamenice. Visitors begin their adventure in Hřensko, a village that straddling the border of Germany and the Czech Republic, acting as a gateway to the Czech nature. Seek the trail that hugs giant sandstones as it follows the meandering Kamenice river. After three kilometers of gentle hiking you reach the end of the trail in the heart of the canyon where the only obvious way to continue is by boat. Before explorers discovered this part of the park, it was often called the be “the end of the world” for its mysterious nature. 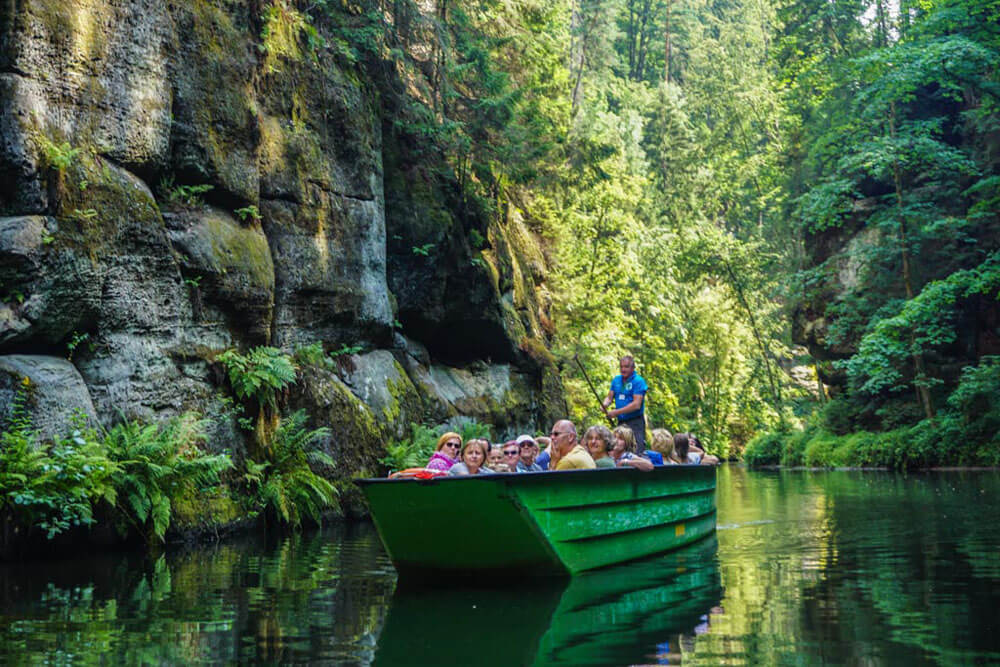 Today, a small port harboring dinghies lie at the end of your journey. Ferrymen usher you onboard before venturing taking through the now-charted territory, up the river. Finally explorers can go where their feet cannot – through the Edmund Gorge. The boats weave in and out through 900 meters of sandstone walls that run into the river on either side, before connecting to another port with a trailhead deeper into the canyon. From here you may connect to yet another boat-driven gorge experience. 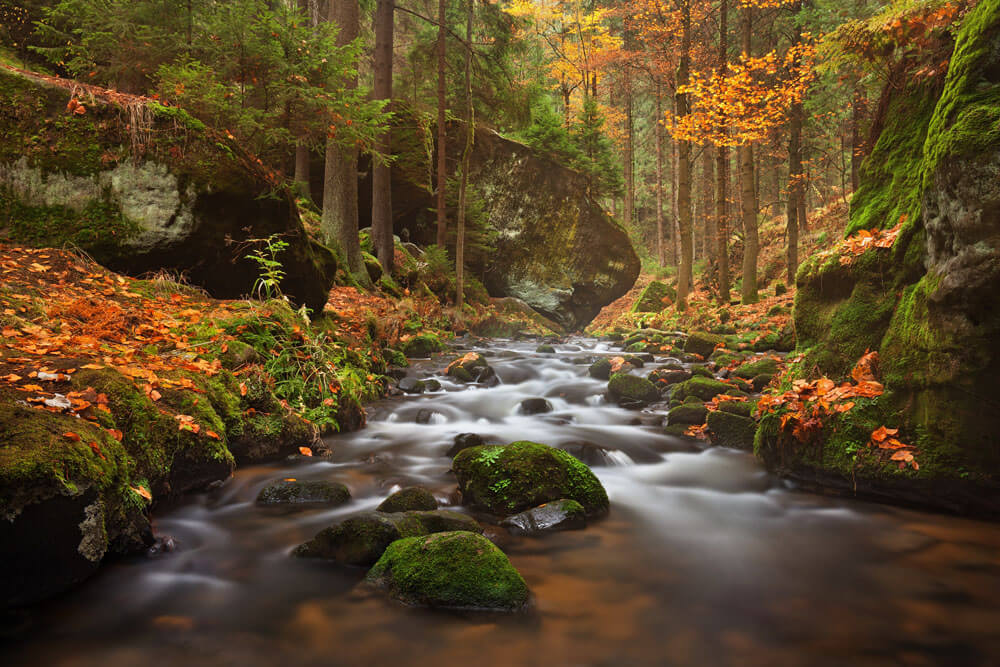 Pravčická Brána, might be the most iconic of the landmarks in Bohemian-Switzerland National Park. The majestic rock formation holds the seat of the biggest natural arch in Europe. In Bohemian-Saxon Switzerland, it is also considered the most beautiful and a symbol for the entire region. The sandstones act as a figurative “gate” into the pristine backdrop beyond, and has been well loved by nature lovers for centuries. 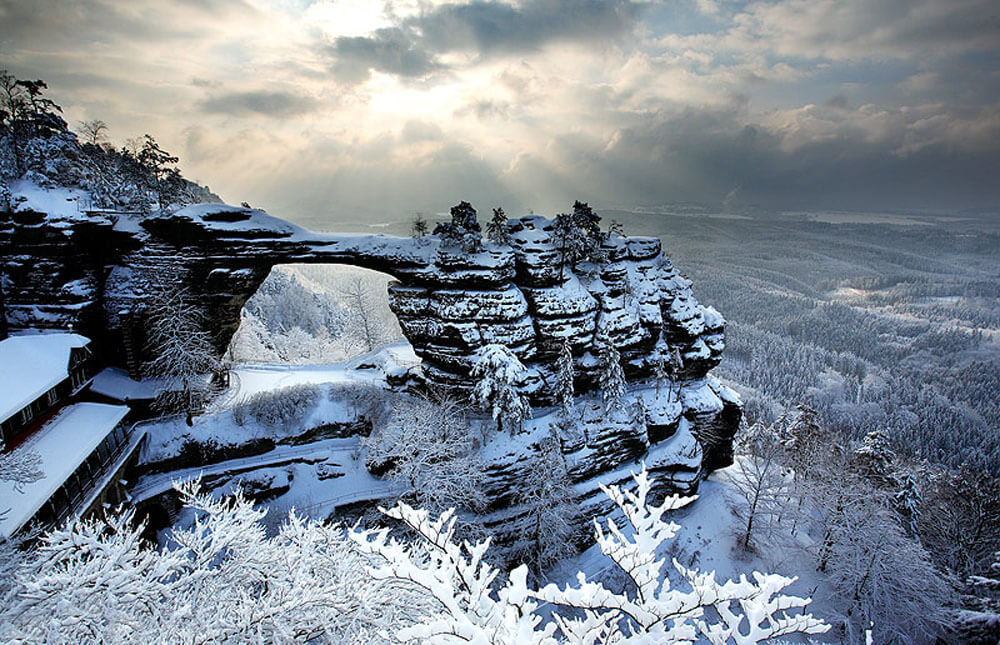 While this rock bridge formed millions, depictions of the scenery can be seen in works by local artists, starting from the mid-1800s. Danish writer, Hans Christian Anderson even journaled about his visit to the region, and this specific site.

The hike up to the Pravčická gate is a strenuous one, elevating in three kilometers, but well worth the effort. The grandeur of the monument is hard to capture in a photo – one has to see it’s beauty up close to appreciate this natural wonder. It spans 26 meters, reaching heights of 16 meters. The arch itself is protected from foot traffic and must be admired from afar. It can be observed from several viewpoints, allowing visitors to take in the impressive views at different angles of both the rocks and rolling forests beyond. Accompanying the Bohemian landscape is the Falcon’s Nest. The holiday chateau built in 1881 was home to a tavern for thirsty travelers. 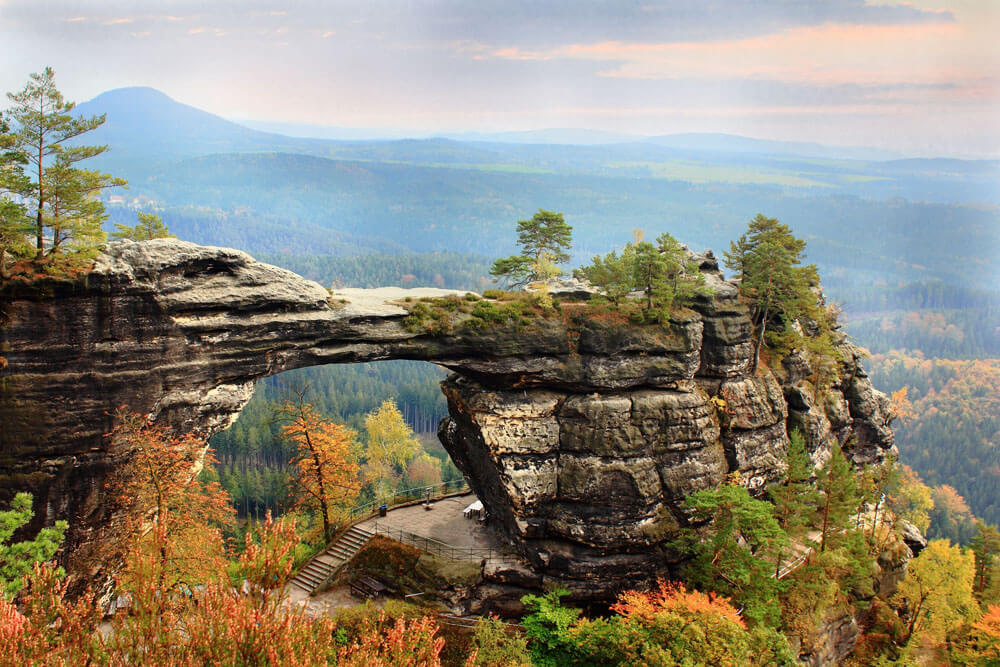 The Elbe Sandstone canyon lies in the heart of the Elbe Sandstone Mountains that straddle both Germany and the Czech Republic. This piece of paradise has earned the title of deepest sandstone canyon in the world. Here you see ancient sandstone formations that tower over the Elbe river 194 meters below. This panorama is best seen from Belvedere and offers one of the most prominent views. 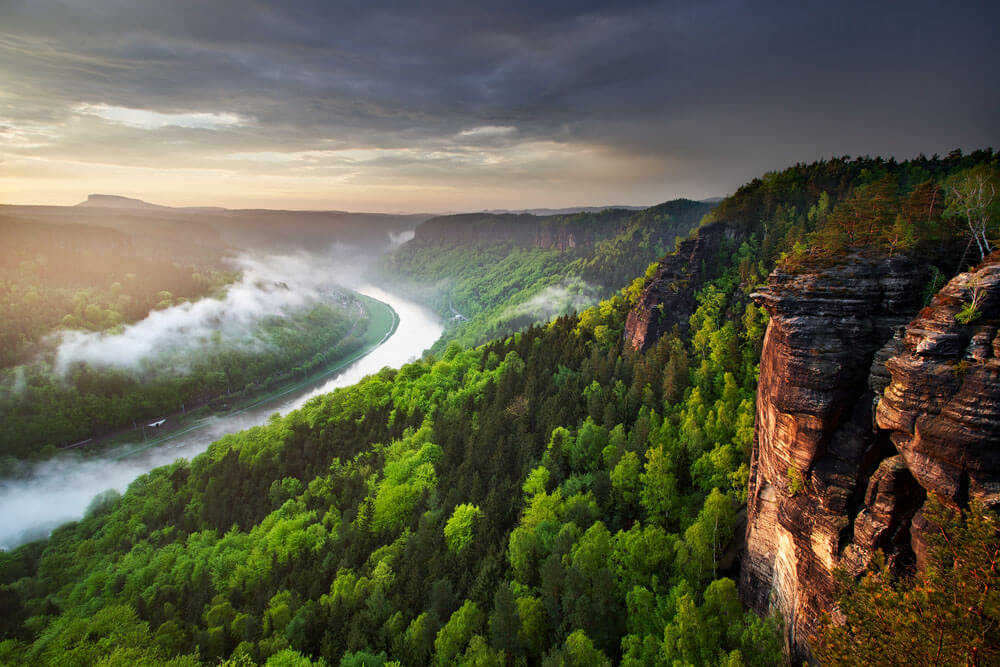 It’s hard to say what is the most remarkable landmark in the Bohemian-Saxon Switzerland National Park, but Bastei might be. This natural masterpiece has been inspiring artists, poets and tourists alike for two centuries. This part is where the park got it’s name. Artists and painters came from Switzerland in the late 1800s and felt it’s beauty was reminiscent of their home in the Swiss Alps. 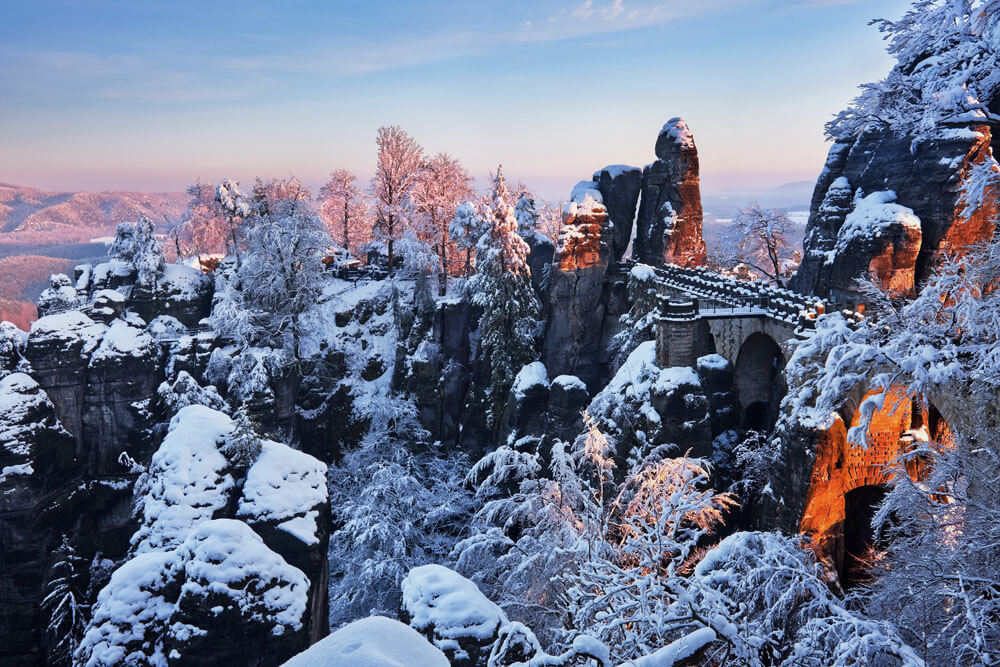 The famous bridge located on the Saxon side in Germany allows you get up close with this stunning piece of Bohemian wilderness. Huge slabs of stones piled atop each other and reach up to the sky make up this impressive vista. The overpass was created for tourism, and the first of it’s kind, allowing you to wander on top the rocks to gain a different perspective. Walking across the bridge allows visitors to explore deeper into the sea of sandstone giants that give Bohemian-Saxon Switzerland it’s fame. 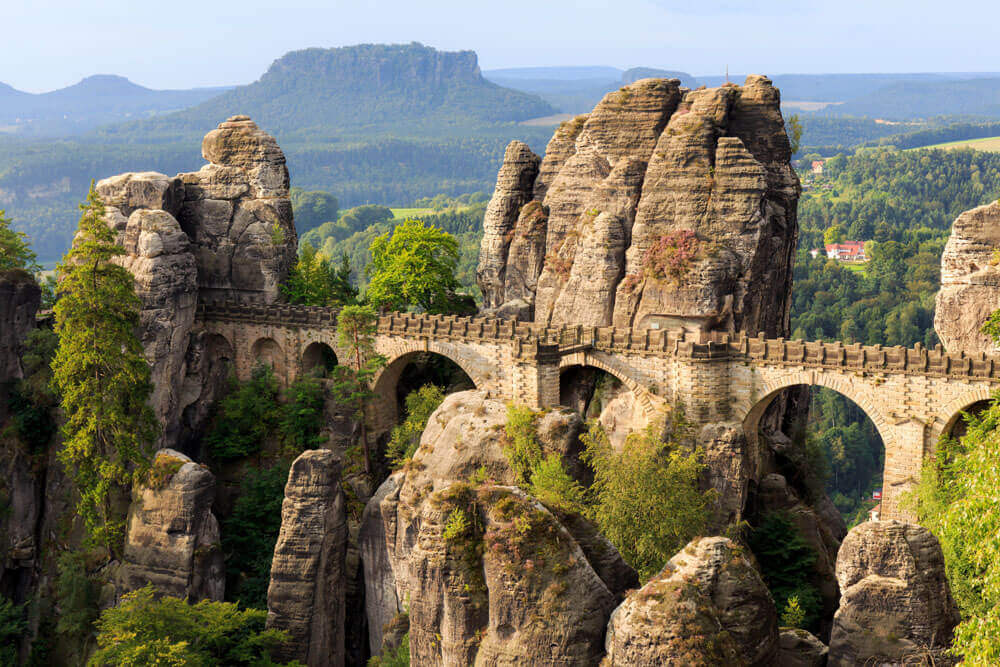 So take it from us, the best way to experience nature just outside of Prague in the Bohemian mountains. These five landmarks represent the beauty and diversity found in this region of Bohemia and the Czech Republic. No matter which locations you seek, a visit to the Czech nature will not disappoint. It will be filled with memorable experiences, spectacular sites, and brilliant views. 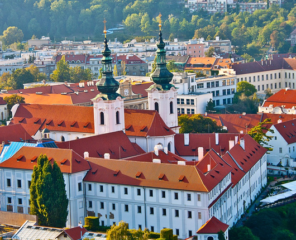 Places to visit in the Czech Republic (Our favorites)

The Czech Republic is the heart of Europe. No wonder it appeared on your list of countries to visit on the old continent. It is a small country, not exotic, but it has many natural and cultural treasu...
Read more
Anna Skopková
2018/08/16
Share article 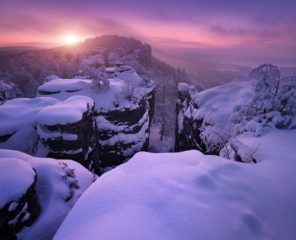 Discover the Land of Narnia in Bohemian Switzerland

Bohemian Switzerland is a National Park located only two hours away from Prague, the capital of Czech Republic. Locals sometimes call it the Land of Narnia since some of the key scenes from The Chroni...
Read more
Lenka Silhanova
2019/01/27
Share article 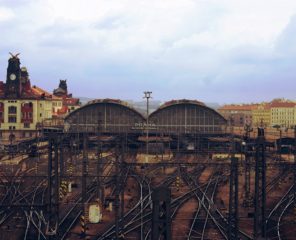 How to get from Prague to Bohemian Switzerland

The Bohemian Switzerland National Park is a popular and attractive location and a frequent destination for tourists from Prague. The great advantage of the park is its easy accessibility (if you do no...
Read more
Michel Struhárová
2019/07/25
Share article